Review: Philip Anselmo and the Illegals, "Walk Through Exits Only" 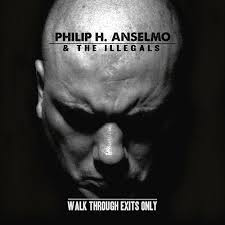 Phil Anselmo is angry. And he’s going to scream at you until you get it. That’s the general gist of his first solo album Walk Through Exits Only.

The record opens with a nearly two-minute intro track, “Music Media is My Whore,” which is dissonant, choppy and uncomfortable as he announces his intent to make a type of music that’s never been made before. I’m not quite sure that he achieves that lofty goal, but the eight tracks on this record are certainly different.

There are portions of the album that are like a hard slap in the face or a baseball bat pummeling you over the head. They’re ugly, gnarly and beastly. But nearly every time, those passages are balanced by others where you find yourself bobbing your head and locking into the groove, the way you would with a Pantera or Down record.


All of Anselmo’s influences come out on this record. There’s an in-your-face hardcore attitude, there are traces of extreme metal, there are the thrash and groove elements of past projects, and there are even some doom-like guitar riffs sprinkled here and there, particularly on tunes like “Betrayed.”

One of the most striking songs on the record to me is “Usurper’s Bastard Rant.” Admittedly I want to move the possessive in the title behind the word bastard, but then it’s not my song. I’m drawn to the more groove-oriented material, and this is the best of that bunch with some really nice guitar work that blends speed and chuggy, bending, angular riffs. When the guitar solo comes, there’s a lot of noise-making in place of shred, but then the two guitars blast away into some more technical runs followed by some more whammy bar noise making. It’s the one song on the record that I liked instantly without giving it any time to grow.

The title track is Anselmo’s rant against the state of music. It opens with some technical death metal influence as shredding guitars cover blast beats from the drums as Anselmo screams “It’s ruined, it’s ruined, everybody ruins music, not just me.” The song goes on in short spurts of extreme metal and a more familiar Pantera-style groove. About halfway through, it breaks down into a very nice thrash riff as Anselmo shouts “I walk through exits only, because I can” in a hardcore bark. Then there’s a very solid groove — perhaps one of the best on the album. Toward the end come a couple of slabalicious Sabbath-inspired chunks of metal. It’s a track that has a lot of things going on, and listening to it in headphones to write this, I’m hearing even more things that didn’t come through on my big speakers. It’s a weird song that I wasn’t sure whether or not I liked the first time through, but hours later, I found myself humming snippets of it.

The juxtaposition of crazy technical blasts and groove is a recurring theme. We get it early on “Bedroom Destroyer,” with a thrash opening, another monster groove riff, and then just a bunch of crazy, seemingly disjointed passages that somehow manage to come together into a coherent song.

I was a bit concerned about the final song, “Irrelevant Walls and Computer Screens,” when I saw that it clocked in at 12 minutes. I didn’t know how well this style would hold up over a song that long, but it manages well through most of the track. About halfway through, we get some very spacey and smooth dueling guitar leads over a pick drag riff that surprises with its melodic qualities. That segment swells into a dramatic and almost symphonic crescendo. That fades out to some distorted white noise over a heartbeat sound and then to some warbly electronics and what sounds like windchimes ringing before the music builds back in with a bluesy Sabbath feel. The song fades on a return to a more extreme sound. There’s something very much like a heavy metal Pink Floyd to the final six minutes or so of the song.

Lyrically, there’s not a lot of artistry in what Anselmo is screaming, but even he admits that in the press material, saying “there isn’t any wordplay, there isn’t any hidden message, it’s all right there in front of you.”

I’m hesitant to make any final judgment on my opinion of Walk Through Exits Only at this point. It is, as Anselmo hoped it would be, a different kind of beast. At the moment, I really like it, with the title track and “Usurper’s Bastard Rant” being songs that I’m sure will stick from it. But this is the kind of record that’s going to need a lot of time and many plays before I’m comfortable in stating my final opinion.

Though all of the elements are somewhat familiar, the way they’re put together is not. For now, suffice it to say that Walk Through Exits Only is one of the most interesting records that I’ve heard in a long time. And in this day and age, where truly interesting music seems to be a rare commodity, maybe that alone is enough to recommend it.