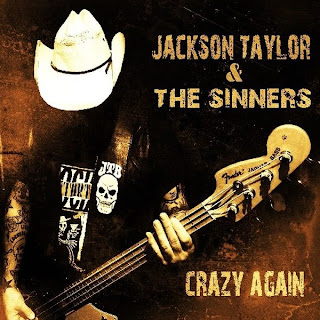 For some reason, Jackson Taylor seems to fly under the radar on the underground country scene.

You don’t hear as much about him, but he’s released a solid string of hell-raising, good-timing, rowdy country albums. His latest, Crazy Again, continues that line.

Though he does, every now and then, take a swim in the deeper end of the pool, it’s not really Taylor’s style. He’s more the guy that you hire when you’re ready to get the party cranked up around the pool. For that job, he’s the perfect person.


Look no further than what is sure to be a centerpiece track for fans, “Whiskey Drinking Song.” It opens with a hybrid picked blues rock lick and Taylor mumbling in a way that’s sure to put listeners in mind of ZZ Top’s “La Grange.” From there it morphs into a honky-tonk country swinger with Taylor, at times, doing a pretty fair Dale Watson impression. It’s not hard to imagine the whole bar room raising beer bottles in the air and singing along with the chorus as Taylor urges. After a few minutes of that, the band cranks it up and we end with a blast of high-energy rock ‘n’ roll as the whole band joins in to shout out the off-color chorus.

Perhaps the song is an example of why he hasn’t gotten wider exposure, but it’s also a beautiful illustration of the sarcastic, not-giving-a-shit attitude that makes his albums so much fun.

Along those same lines is the seemingly autobiographical “Jack’s Drunk Again,” an incredibly infectious, upbeat country rocker that trots out some old, reliable country standards that still work well in this context.

“She’s Not Your Girlfriend” stomps along, having a little fun with a relationship that’s likely to end badly. Taylor reminds me of Bocephus in his prime on “What a Way to Go,” another rock influenced number with a huge chorus hook that lays out the story of the subject’s misadventures in love. There’s more of dirty ZZ Top guitar sound on the beginning of “Make Up and Faded Blue Jeans,” and though Taylor gives it a country twang, the song itself is something that I could definitely see a 1970s-era Billy Gibbons moaning out.

It’s not all good times and partying, but even when it’s not, things stay fairly upbeat. “Rain,” a tale of lost love, digs more into the red dirt range with some alternative rock overtones. Though it’s a story of loss, the overall feel of the song is one of hope that one day things will be all right, which is proven right by the end of the song.

Even in a tale of woe, Taylor leaves you with a good feeling. “Letting Go” is, perhaps, the saddest tune on the album, and even it features a jaunty melody that belies the sadness.

That’s not to say that Taylor can’t deliver a heartfelt tune. He proves on “This Ain’t Goodbye (Paul’s Song)” that he can do it with the best of them. It’s the most restrained performance on the record as a dying man says goodbye to his friends and family with the assurance that they’ll meet again one day. It’s a moving song, but far from sad. Depressing is just not something that Jackson Taylor does, and that’s not a bad thing.

Maybe the heavy rock ‘n’ roll influence might turn the traditional country crowd off a little. It’s all over the place, particularly on a song like “No Place to Go,” which has little or no country in it, but Taylor comes by it honestly and uses it well. He’s perhaps one of the true embodiments of the old “too country for rock and too rock for country” adage. But if you’re looking for a damned good time, he’s the man to call.