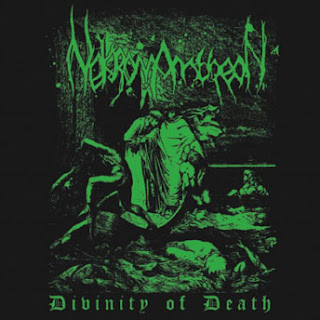 The name, logo, album cover and Norweigian origin all say extreme metal, but the music on Nekromantheon’s Divinity of Death is pure candy to the ears of classic thrash fans.

Nekromantheon blazes through 11 tracks in about 30 minutes sounding like the bastard child of Show No Mercy-era Slayer and very early Sepultura. The songs are short, fast, punchy and very solidly played. They don’t cover any new ground in the thrash genre, but at the same time they also manage to sound fresh and not derivative.


Album opener “Gringo Death” begins with a bit of homage to Metallica with a volume swell of drum and guitar similar to the opening of “Hit the Lights” and then drops into a chugging Slayer-like open riff that’s one of only a handful of mid-paced moments on the record. Once the speed kicks in about a minute and a half in, the pace is set to breakneck for the rest of the record with only the occasional chugging break sprinkled through the songs. “Cry Havoc” has a real feel of Sepultura’s early work, which, of course, was a bit of a copycat of Slayer, too. The Sepultura portion of the sound comes a little more from Arild “Arse” Torp’s vocals, which sound like a slightly less gruff Max Cavalera. It’s also obvious that Torp, who is also the guitarist in the three-piece outfit, worships at the altar of King and Hanneman in both riffs and leads. So, yeah, there’s a whole lot of Slayer, though the music here never crosses that fine line into imitation.

There are a few forays into a more death metal-influenced style, here and there, as on the brief, bashing instrumental “Lex Talionis,” but they never fully integrate that into the overall sound, which stays firmly rooted in the 1980s thrash scene, but doesn’t, for some reason, sound dated to my ears. There’s certainly a formula to the 11 songs on Divinity of Death, but it’s a well-crafted and well-executed formula, with just enough variation to keep the listener interested, like the fantastic opening riff of “Psyanide,” which returns, at the end of the record, to the mid-tempo pace. Even that track, though, gives way to speed riffing and bashing drums in the end.

The record closes where it began, firmly in Kill ‘Em All-era Metallica mode with “Alcoholy Terror,” featuring a main riff that will certainly remind old thrash fans of “Whiplash” or “The Phantom Lord.”

There’s not a lot more to say about this record. If you’re familiar with very early Slayer, Sepultura and Metallica, throw it in a blender and Divinity of Death is what you get. As far as I’m concerned, though, that’s a very good thing. Children of ‘80s thrash, dig in and enjoy.

A review copy of this record was provided by the label. This review first appeared at Teeth of the Divine.