Review: Kamelot, "Poetry for the Poisoned" 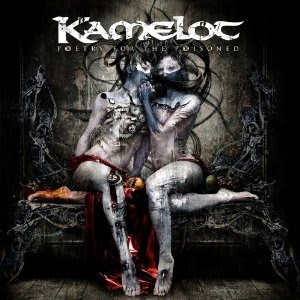 I’ve always liked Kamelot, and over the years, I’ve enjoyed just about everything they’ve done. But I’ve never been a hardcore fan. So maybe it’s a little strange that a record which is somewhat experimental for them has quickly become my favorite offering in their catalog.

The elements that have always made up Kamelot’s music are still there – strong melodies, operatic and dramatic flair, and, of course, Roy Khan’s powerful and hypnotic vocals. But there’s certainly a more progressive direction here. That’s always been a part of their sound, but it gets pushed a little more to the forefront on some of the tracks. There’s some flirtation with electronic sounds and a harsher vocal here and there, and the usual bombast, though still present, is dialed back in places.


There’s plenty of bombast, though, on album opener “The Great Pandemonium.” It’s a huge, operatic piece that combines darkness with a big melodic and memorable chorus. Soilwork’s Bjorn “Speed” Strid steps in to provide some growls to give it that little something extra. It’s a great way to open the record.

From there, we move to a blazing riff for the opening of “If Tomorrow Came” before the song drops down into a darker, more mysterious groove, sprinkled with a harsher vocal approach that’s not quite a growl, and a chorus that, of all things, reminds me of 1980s new wave – but in a good way.

It will come as no surprise to those familiar with my tastes that the twisted fourth track, “The Zodiac,” checks in as my favorite track. It’s a wickedly lilting song that perfectly fits the guest vocal by Savatage singer Jon Oliva. He turns in a somewhat subdued performance on the track, almost deferring to Khan, but it’s still quite effective. Regular Kamelot guest vocalist and Epica singer Simone Simons makes her first appearance on “House on the Hill,” which opens with an a cappella piece for Khan that builds into more of a goth feel. It’s about as good as this sort of ballad gets.

Most of the songs here have something to recommend them. “Hunter’s Season,” one of the few tracks here that uses some of the conventions of the genre, has a good dramatic feel. It also has a guest solo by Firewind/Ozzy Osbourne guitarist Gus G. “Necropolis” has one of the coolest grooving guitar riffs. “Seal of Woven Years” features some nice symphonic madness, and “Once Upon a Time” is one of the most representative pieces of the band’s previous work.

The intended centerpiece of the record is the four-song title piece of the record. Part one, “Incubus,” opens with a dark goth tone and features some nice, almost bluesy, lead guitar work from Thomas Youngblood. The track builds to a symphonic crescendo before softening again toward the end. The second part, “So Long” features the second appearance from Simons, dropping back to a ballad and slowly building again. Some heavier riffing from Youngblood and more aggressive drums from Casey Grillo give the track some backbone without losing the dream-like feel. The third part, “All is Over,” gives a little tease of a more metallic riff before falling back into a ballad with Simons, and “Dissection” gives more of the goth sound before building into a heavier piece that comes crashing down at the end. If there’s part of the album that I’m not quite sold on, it’s this series. The movements are all very brief and, at times, seem a little disjointed and jerky.

Kamelot has always transcended the typical conventions of the symphonic/power metal genre, but they seem to take that even further on this record, adding a dark gothic tone, and pretty much doing what they want, but managing to do it without leaving their roots behind. The album is a bit like the musical version of a dark fairy tale. It’s a record that certainly has the potential to turn some fans off in places, but it’s a sure thing for my year-end list and, at least at the moment, my favorite Kamelot record.

Posted by Fred Phillips at 3:46 PM