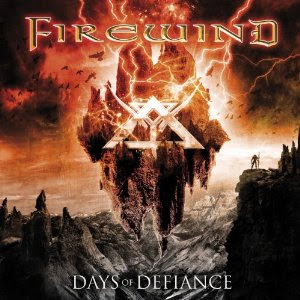 Firewind has long been one of the steadiest, most reliable acts in the power metal genre. Despite guitarist Gus G.’s newfound stardom as Ozzy Osbourne’s latest guitarist, nothing has changed on the band’s latest record Days of Defiance.

The record comes blazing out of the gates with “Ark of Lies,” a tune that has everything fans have come to expect from Firewind. It’s a fast-paced, melodic and memorable. If anything, Gus’ guitar work here is leaner, meaner and more focused, as on the traditional opening riff of “Chariot,” the chunky riffing under the keys on “Killing in the Name of Love” or the almost thrashing opening of “The Yearning.”


As always, the band takes the conventions of the genre and plays them out to perfection. You won’t hear anything on this record that stands power metal on its ear, but you will hear it played at its rock solid best with great precision and passion. Gus’ guitar work is nimble and impressive, with much more fire than the mediocre performance found on Ozzy’s “Scream.” This being his project, he gets a chance to stretch his talent, and the impact of his playing is felt more on tracks like the blazing “Heading for the Dawn.”

It’s not all about shred, though. On “Broken,” Gus delivers an acoustic riff with a slightly medieval feel over a bluesy rhythm section. He also provides some intricate acoustic interludes, the best being the opening of “Cold as Ice,” (thankfully not a cover of the Foreigner hit, but with occasional similarities in the synth sounds) which also delivers one of the more memorable melody lines on the record. He ties it all together in the instrumental “SKG” which has some blazing speed metal pieces and some softer, smoother moments that may remind listeners of shred instrumentalists like Joe Satriani and Steve Vai. The song also serves as a showcase for keyboard player Bob Katsionis. Normally I’m not a big fan of keys, but I generally like how Firewind uses them.

While Gus is the founder and driving force behind the band, the rest of the musicians aren’t exactly slouches. It’s a solid effort on all fronts, including from newcomer Michael Ehre on drums. He adds a little more pop in some of the more aggressive moments on the record. Vocalist Apollo Papathanasio delivers another top-notch performance on his third outing with the band, sometimes moving into Jorn Lande territory, and certainly showing a meaner side to his vocals here and there.

As I said at the beginning, Firewind has emerged as one of the most reliable acts in the genre, and this may just be their best effort to date. If you like power metal, you’ll love Days of Defiance.

Posted by Fred Phillips at 2:34 PM