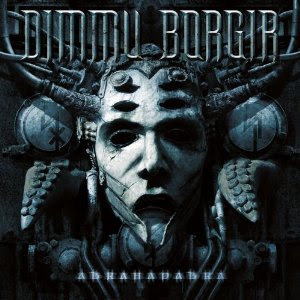 I’ve never been a huge fan of black metal, a dabbler at best, but hearing “Progenies of the Great Apocalypse” from Dimmu Borgir’s 2003 outing “Death Cult Armageddon” made me an immediate fan. Then again, the hardcore black metal crowd would probably tell you I still don’t like the genre because Dimmu Borgir is no longer part of it, and they’ve sold out because more than five people know who they are. Maybe they’ve got a point.

Certainly, what’s on the band’s latest effort, “Abrahadabra,” bears little resemblance to other acts in the genre, apart from the raspy vocals and a few occasional blast beats.
For “Abrahadabra,” the band parted ways with bassist and clean vocalist ICS Vortex, as well as keyboard player Mustis. They also recruited a full symphony orchestra and choir, and it’s those 100 or so musicians that are the MVP’s of Dimmu Borgir’s most ambitious effort to date. “Abrahadabra” is more symphonic than ever, exploring themes and moods that will remind the listener at times of Wagner and Orff. The orchestra and choir is used effectively, integrated fully into the compositions rather than just thrown in so they can use the term symphonic. The music here is huge and majestic, taking everything I loved about “Progenies of the Great Apocalypse” and cranking it up to 11.

At times, as on opening introductory track “Xibir,” you’d be hard-pressed to call it metal at all. But even on some of the meatier songs on the record, like the eponymous “Dimmu Borgir,” the metallic instrumentation is pushed into the background, giving way to the classical instruments. It’s an interesting approach on a song like “The Demiurge Molecule,” which features a guttural vocal with thrash and hardcore leanings over a musical piece that, for the most part, would be at home in the catalog of one of the darker classical composers.

There are a few songs toward the end of the record that do more resemble the band’s past work, such as “Ritualist,” but even they incorporate some different elements. There’s a very nice haunting acoustic guitar bit that opens “Ritualist” and runs throughout the song, and it’s filled with flourishes of the symphonic punctuating the vicious metallic elements. The thrashy “Renewal” represents one of the more heavy songs here, but still keeps a very melodic and symphonic air. There’s a nod to their treble-filled black metal roots again on “A Jewel Traced Through Coal,” but even it has a big, full opening and some cool choral parts toward the end.

That is perhaps the thing I love most about this record. While most black metal acts seem to want to beat you over the head with noise and make music that sounds as thin and tinny as possible, Dimmu Borgir offers a full, room-filling experience. There’s a great deal of effort put into both the composition of the music and making it sound as good as possible, while not really losing any of the heaviness or nastiness that should be incorporated in the extreme genres. It's dark. It's menacing. It's haunting. It's creepy. It has a great deal more depth than their previous efforts. “Abrahadabra” is certainly the band’s master work to this point, and I’ll be interested to see how they evolve from here.

If you’re looking for a dark, bombastic and, at times, downright mean record to celebrate this weekend’s Halloween festivities, you could do much worse than “Abrahadabra.” I can guarantee if you blast this during trick or treating, you’ll have the most frightening house on the block.

Posted by Fred Phillips at 2:58 PM