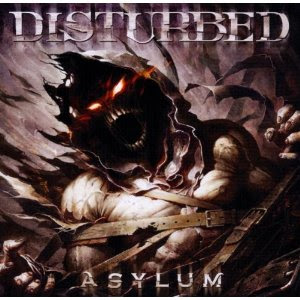 Here are quick shots of a few more recent records:

Disturbed, "Asylum"
After delivering their best effort since their debut with 2008’s “Indestructible,” Disturbed had me really looking forward to this record. Much like “Believe,” the follow-up to their debut, “Asylum” is a disappointment. The songs here are not as catchy as those on “Indestructible” and, like “Believe,” they lean more toward the mellow and melodic. I know a lot of people don’t like David Draiman’s “monkey screams,” but to me, when he uses the more melodic approach, his vocals are like wallpaper, and that’s the case here.


To be honest, this record rubbed me the wrong way from the first track I heard from it, “Another Way to Die.” It wasn’t the environmental message that bothered me. That can be done well, a la Metallica’s “Blackened.” Instead, it was the utter preachiness of the song. While, musically, it’s not horrible, the lyrics read more like a sermon than a song, and I can’t stand that. There are some nice moments here, like the spooky opener “Remnants,” the title track and the crunchy “Sacrifice,” but more often than not the songs are flat and boring. They try to recreate past success with covers (Tears for Fears’ “Shout” from their debut and Genesis’ “Land of Confusion” from “Ten Thousand Fists”) by closing this record with a version of U2’s “I Still Haven’t Found What I’m Looking For,” but they don’t bring anything new to the table and it pales in comparison to the original.

"Asylum" is an OK record, but not likely to get much play time through my speakers.
Check out: "Remnants," "Asylum"
Consider: "The Infection," "Another Way to Die," "Sacrifice"
Skip: "Warrior," "Never Again," "The Animal," "Crucified," "Serpentine," "My Child," "Innocence," "I Still Haven’t Found What I’m Looking For"


Jaldaboath, "The Rise of the Heraldic Beasts" 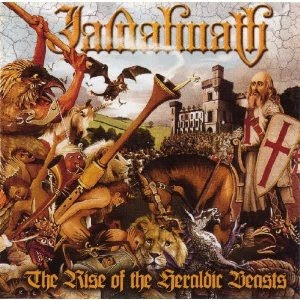 I love off-the-wall and goofy metal records, and it doesn’t get more off-the-wall and goofy than Jaldaboath. Most of the descriptions that I’ve read of this record describe it as a combination of Monty Python and folk metal, and since I can’t think of a better one, I’ll parrot that. “The Rise of the Heraldic Beasts” will certainly only appeal to those with a taste for the odd, and even for us, it won’t be a regular listen. Unlike bands like pirate metallers Alestorm that back their schtick with a some solid slabs of metal, Jaldaboath goes all in for the silliness. There’s not really a serious note to be found anywhere. Courtly medieval jaunts blend with crunchy guitar parts and there’s plenty of synthesized corny heraldic trumpets scattered throughout the record. Even the vocals are more suited to the soundtrack of “Spamalot” than a metal album. All of that said, though, the record is fun and funny and good for a few spins and laughs.
Check Out: “Hark the Herald,” “Bash the Bishop,” “Jacque de Molay,” “Da Vinci’s Code”
Consider: “Calling on All Heraldic Beasts,” “Axe Wielding Nuns,” “Jaldaboath”
Skip: “Seek the Grail,” “Bring Me the Head of Metatron” 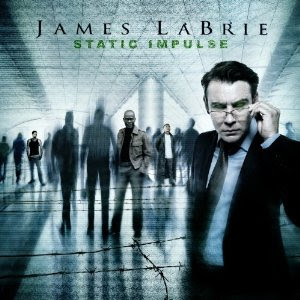 In truth, I’m not sure what to think about this record. I’m still processing it. I really liked LaBrie’s last solo effort, but this one is, well, odd. It starts with the Soilwork-ish opening track “One More Time,” and doesn’t really ever establish its identity. The presence of LaBrie’s progressive roots is certainly there, but it seems he wants to go for a heavier sound, which at times works and at others doesn’t. For example, second track “Jekyll or Hyde” is kind of cool, but the transitions between the growls of keyboardist Matt Guillory and a very lightweight, almost glam, vocal seem kind of hokey. Often, LaBrie’s vocals go for toughness, but that’s not really his strongpoint. Oddly, the more standard numbers you’d expect from LaBrie, “Euphoric” and “I Tried,” are among the weakest songs to be found here. There’s progressive, nu-metal, attempts at melodeath and even the straight up hard rock verse of “Over the Edge,” and that’s the biggest problem with this record. It’s all over the musical map. It never finds an identity and it lacks any sort of consistency. That said, there are things that I really like about it. Guitarist Marco Sfogli, who impressed me on the last outing, is still a strength, and the band is solid all around. So, do I like it or do I hate it? I’ve been listening for more than a month, and I honestly don’t know.
Check out: “Over the Edge,” “Who You Think I Am.” “Superstar”
Consider: “One More Time,” “Jekyll or Hyde,” “Mislead,” “I Need You,” “Coming Home”
Skip: “Euphoric,” “I Tried,” “Just Watch Me,” “This is War”