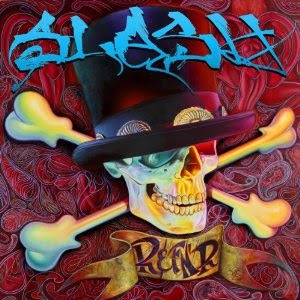 Despite an impressive list of guest artists, Slash’s self-titled solo CD never climbs beyond the mediocre.

There are usually two main problems with records like this. Either the songs end up sounding like the guest artists rather than the primary artist or the collaborations sound forced. This album has both.

There are some surprising guests and some not-so-surprising guests here. You might expect a Slash record to feature guest shots by the likes of Alice Cooper (who he’s played with before), Ozzy Osbourne or Ian Astbury. You’d be less likely to think of pop singer Fergie, rappers Cypress Hill or Maroon 5’s Adam Levine. They’re here, too, with mixed results.


At best, the tunes here sound like decent songs by the guest artist. At worst, they sound completely uninspired. Of the latter, the worst is likely album opener “Ghost” in which Astbury sounds like his performance was completely phoned in. Another huge disappointment is Chris Cornell’s appearance on “Promise.” I’m a huge fan of Cornell’s ripping vocals from his early work with Soundgarden, but this song is more along the lines of the solo stuff he’s been doing lately – and just as lame.

Myles Kennedy of Alter Bridge makes a couple of appearances on “Back from Cali” and “Starlight.” The first has its moments, but gets old quick. The second sound a little more real, with Slash offering up some nice bluesy slide, but it’s still not very memorable. The lead single, “By the Sword,” featuring Andrew Stockdale of Wolfmother has a nice big grooving guitar riff, but doesn’t use it enough and Stockdale’s voice is a little too whiny for my tastes. Levine delivers “Gotten,” a pop ballad, and, well, that’s all I’ve really got to say about that one.

That brings us to the sound-alikes. One of the winners of the record is the garage rocker “Baby Can’t Drive,” featuring Alice Cooper and Nicole Scherzinger. Yes, it sounds like a Cooper tune, but it’s one of the only songs that I actually remembered after the first listen, and one of the only ones I’ll probably return to. “Crucify the Dead” sounds like a modern Ozzy song. I suppose it’s as good as anything off “Black Rain,” but that’s really not saying much, is it? M. Shadows makes an appearance on “Nothing to Say,” which unsurprisingly sounds like an Avenged Sevenfold song.

I was excited to hear Slash’s collaborations with Kid Rock and Iggy Pop, given the reputation of those involved. I was expecting some high-energy, hard-partying rockers out of those. Instead, he opted for the faux Southern rocker “I Hold On” with Kid Rock, which sounds completely fake. “We’re All Gonna Die” isn’t bad for a newer-era Iggy Pop tune, but it’s not nearly what it could have been.

One of the few collaborations that does live up to what you might expect is “Doctor Alibi,” featuring Lemmy Kilmeister. It’s a rip-roaring rocker with punk influences that sounds like an “Appetite for Destruction”-era Guns ‘n’ Roses song with Lemmy on vocals. Even it, though, sounds forced at times.

That’s not to say that there aren’t a few surprises lurking on the record. The biggest of those has to be when Fergie takes the mic. “Beautiful Dangerous” is a decent commercial rocker with some Aerosmith overtones, and she actually makes a decent rock singer. In fact, for me, (and I’m loathe to admit this) it’s one of the high points of the record. She returns again for a new version of “Paradise City” with Cypress Hill, where she actually does a decent Axl Rose impression here and there. Speaking of that song, I know a lot of people will absolutely hate it, but as a closet Cypress Hill fan, I kind of dig it (after you get all the cliched “yes, yes y’all junk over with at the beginning).

But there’s one song on this record that underlines the problems with the rest of it. That’s the instrumental “Watch This,” featuring Dave Grohl and Duff McKagan. It moves through moods from smooth Joe Satriani-like leads to some rougher Guns flavored rock. It’s one of the best numbers on the record, and proves the point that the high-profile guest vocalists often get in the way of the music.

It’s not an awful album – though it has some pretty awful moments – but it’s just exceedingly mediocre despite the star power. I’d much rather have a new Velvet Revolver record, or in a perfect world, a new offering from the real Guns ‘n’ Roses. I guess we can all keep dreaming on that one.

Posted by Fred Phillips at 1:47 AM