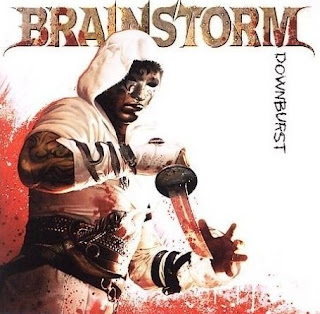 So often, in the review business, it all comes down to timing. I try to keep an open mind and give fair reviews for every CD that comes across my desk. But in all honesty, if I get an OK record in a style that I’m just really burned out on at the time, it probably doesn’t get as fair a shake as it should. Some of it is right record, right time.

With the latest record from Brainstorm, it’s a case of the perfect record at the perfect time.

I popped the CD into my player for the first time on my way home after another crap day at work, and I wonder what the other folks on the road must have thought when they saw me grinning like a madman and banging my head like crazy as I drove past. This is the kind of record I’ve been looking for. There are no unneccessary intro pieces, no wimpy ballads, no over-the-top power metal pretensions, no trendy screams. In short, no bullshit. Brainstorm plugs in, cranks up and rocks the fuck out like it’s 1985 – with much better production values of course.

Sure, Brainstorm’s music has always been rooted in the traditional, but on Downburst, they nail the vibe absolutely perfectly. From the first riff of album opener “Falling Spiral Down,” you get the overwhelming sensation of the glory days when Priest and Maiden ruled the metal world. Unlike bands who simply copy the riffs, though, Brainstorm owns the style. Guitarists Torsten Ihlenfeld and Milan Loncaric lay down some monster riffs and Andy B. Franck’s powerful voice commands the listener’s attention.

The record is loaded with big, memorable hooks, notably on songs like “Fire Walk With Me” and “Frozen,” which stick long and hard. They do toss out a few interesting moments that stray from the traditional. The opening of “Redemption in Your Eyes” kind of puts me in mind of an In Flames riff. There’s a bit of a prog feel to “End in Sorrow,” which even as the slowest track on the record offers up some beefy riffing. The band does veer a bit into the power metal realms later in the record as the keyboards show up heavier than on the earlier songs, but they’re used nicely to punctuate the music rather than overwhelming it. The record ends solidly in traditional territory with the aforementioned “Frozen” and its huge chorus and the strutting groove and Queensryche influnced bridge and chorus of “All Alone.”

I was a bit disappointed with Brainstorm’s last effort, "Liquid Monster," after a solid performance with my introduction to the band "Soul Temptation" in 2003. But they bounce back strong with this record, surpassing their previous efforts. In short, "Downburst" is the best record I’ve heard so far this year.

Get "Downburst."
Posted by Fred Phillips at 7:34 PM