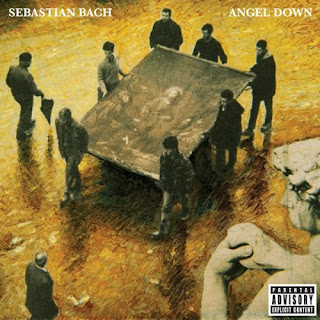 Despite their regrettably hairy hits, “I Remember You” and “18 and Life,” I do think Skid Row was one of the best hard rock bands to emerge from the late 1980s scene. The latest release by former singer Sebastian Bach, though, serves to underline the fact that they need to put egos aside and get back together. Skid Row needs Bas’ voice and attitude, and Bach needs someone who can write a decent hook.

"Angel Down" is far and away the best work produced by either camp since the split, but that’s hardly high praise. It is surprising, though, considering that Bach’s previous solo effort was a complete throw-away, consisting of a few truly horrible original songs and live versions of Skid Row songs. This record is much closer to what I had hoped for from that one. "Angel Down" sounds a bit like what Skid Row’s third record, "Subhuman Race," might have sounded like if Bach had written all the songs. That is to say that it’s got a great, snarling production and a nice heavier vibe, but the songs are unfocused and a little sloppy.

The best performance here, not surprisingly, comes from a beefed-up cover of Aerosmith’s “Back in the Saddle,” where Bach swaps verses with Axl Rose. Circa 1990, that might have been a dream pairing of vocalists for a lot of people. Now, Rose’s voice is pretty much shot, and putting it next to Bach belting out the chorus with zeal only serves to reinforce how much Rose has lost. Another pairing with Rose, “(Love is) a Bitchslap” provides the most memorable original hook on the record, and I suspect that Rose probably had something to do with crafting it.

Those two songs aside, "Angel Down" does have its moments. In fact, most of the songs here are right on the edge of being really good songs, but in typical Sebastian Bach fashion, chaos and his diva-like tendencies rule, rendering promising melodies into muddled screamfests. It’s painfully obvious that, though he often has good ideas, he needs someone to reign him in and provide a little control in the songwriting department. To his credit, Bach has lined up a solid band to back him up that provides some heavy grooves and some of the best moments on the record. But he’s still the boss, and the band can’t rescue a song when Bach is screaming silly lyrics like the ones in “American Metalhead” over them.

Bottom line, "Angel Down" is not a bad record. In fact, it’s surprisingly good. Still, it doesn’t even come close to "Slave to the Grind" or "Subhuman Race." Skid Row fans will likely enjoy the album, but with Bach out of control and Skid Row reduced to a novelty act on their last record, it will probably leave fans pining for the days when songwriting and the attitude of "Angel Down" went hand-in-hand.