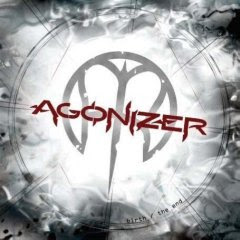 Surprisingly, the brand of melodic metal that Agonizer dishes out is not bad at all. It’s very reminiscent of labelmates and fellow Finns Kiuas, one of my favorite discoveries of the past few years. Agonizer doesn’t delve into the death metal realm like Kiuas, but the melodic bits here are very similar and singer Pasi Karkkainen’s vocals at times bear more than a passing resemblance to Kiuas singer Ilja Jalkanen.

There’s nothing really original or groundbreaking here. The riffs of guitarists Jari-Pekka Perala and Joni Laine are solid with a satisfying amount of crunch, the keys are not overbearing, though perhaps slightly overused, and the band offers up some memorable hooks. There are traces of Sentenced on songs like “Everyone of Us” and “Hazardous,” which starts as a melancholy ballad, explodes into a big hook and then drops into a classical-inspired dirge.

There are a few surprises here and there. Some work, like the hardcore-style backing vocals on the chorus album opener “Prisoner.” Some don’t, like the more commercial rock beginning of “Sleepless.” The opening of “The Birth and the End” is a mixed bag with a nice piece that sounds like a sitar, but the commercial vocals in the first few moments kind of ruin the effect. Though not particularly unusual, the all-out assault of “Prophecy” is also inspired, ranking it as one of the better moments on the record, along with the aforementioned “Hazardous.”

Is "Birth/The End" a great record? Well, as their history suggests, the answer is, almost, but not quite. The album likely won’t blow you away, but it is a rock solid debut from a band that you’ll definitely want to watch for in the future.