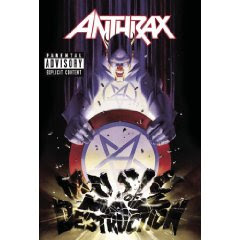 Though he's been in the band longer than any other singer, Anthrax is just now getting around to a live album and DVD with John Bush. It was well worth the wait.

In addition to showcasing the band's live show with Bush, it also gives fans the chance to see one of the last Anthrax shows with original bassist Frank Bello, who recently parted ways with the band.

On "Music of Mass Destruction," 'Thrax rips through a collection of songs both new and old with incredible energy.

There are a few stumbling points along the way. "Bring the Noise" really doesn't work without Public Enemy involved, and I still think Bush isn't up to some of the older material because it doesn't really fit his style. That being said, I have to give him credit for the ones he belts out better than the original. "Be All, End All" sounds great with Bush on vocals, and even the classic "I Am the Law" takes on a gruffer, more powerful sound.

Of course, when they rip out newer songs like "Inside Out," "Refuse to be Denied" and "Safe Home," Bush is in his element and the performances are tight all around.

Anthrax also throws out a couple of surprises, going way back to the band's debut album for the bonus track "Metal Thrashing Mad" and whipping out a cover of Metallica's "Whiplash." There's also a nice treat for comics fans on the DVD as artist Alex Ross chats about designing the cover for this album, as well as the band's stellar 2003 release "We've Come For You All." He also talks comics with drummer Charlie Benante and shows off some of his personal collection of memorabilia.

Having had the pleasure of seeing Anthrax live, I know this doesn't compare to the real energy, but it's close - a must-have for thrash fans.

Get "Music of Mass Destruction."
Posted by Fred Phillips at 7:32 PM