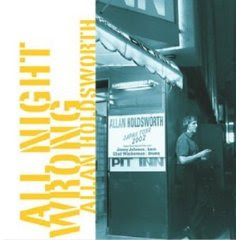 Even us hardcore metalheads have to mellow out every now and then.

Somewhere between Arch Enemy's "Anthems of Rebellion" and Children of Bodom's "Hate Crew Deathroll," I popped in Allan Holdsworth's latest release last week. It was like a douse of cold water over the head - but in a good way.

Recorded in May 2002 at the Roppongi Pit Inn in Tokyo, the album is a collection of light and airy fusion. Though my usual tastes lean to the heavier, I appreciate great guitar in any form, and "All Night Wrong" has plenty of it.

Numbers like the bouncy "Lanyard Loop" and "Water on the Brain, Pt. II" are pretty much what you expect when you hear the word fusion, but other tunes show another side of Holdsworth.

You can hear shades of Holdsworth's progressive rock past on "Alphrazallan." And his ability to coax cool sounds out of a guitar shows on "The Things You See" and "Above and Below," which feature some volume swells that mimic a string section.

My personal favorite, "Zone," showcases the rhythm section of Jimmy Johnson and Chad Wackerman. It's a brilliant reminder of how thin the line between rock and jazz really can be.

Get "All Night Wrong."
Posted by Fred Phillips at 9:55 PM