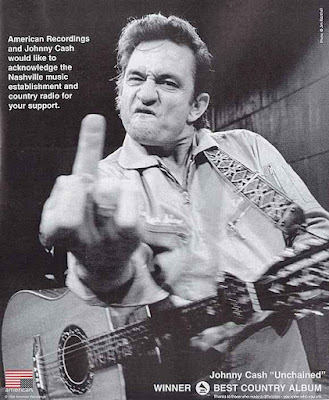 Those four words, spoken in a deep bass rumble, are instantly recognizable to almost everyone, regardless of age or background.

The death of "The Man in Black," country music legend Johnny Cash, saddened both fans and his fellow recording artists on Friday. It was not just a loss for country music, but the music world in general, said Tim McGraw, who is in town for his annual Swampstock concert.

"Bigger than any musical genre was Johnny Cash," McGraw said in a statement through his publicist. "He was an American music icon that set the standard for how to make music on your own terms. We will miss him."

Country singer Andy Griggs remembered growing up listening to Johnny Cash before making his own way to Nashville.

It was Cash's independent and rebellious nature that many fans remember. The famous middle finger ad in Billboard after he won the Best Country Album Grammy in 1998, despite little or no radio support; the way he introduced country audiences to acts like Bob Dylan, via his TV show; the way he redefined himself in the 1990s with rock-rap producer Rick Rubin and reintroduced himself to a whole new generation of fans.

"It was an independent spirit that he brought to the whole music industry, especially for the last 10 years or so with the American Recordings," said musician and radio host Monty Russell, whose band the Hardcore Troubadours closed their set with "Folsom Prison Blues" on Thursday night, just hours before Cash's death.

Russell said he admired Cash for what he did in 1993, by just sitting down with his voice and guitar to record the first "American Recordings" album.

"It was so powerful, just him and his guitar," he said.

Over the course of those four albums, Cash created a new audience for his music through both originals and versions of songs by rock bands such as Soundgarden, U2 and Danzig. Most recently, Cash had a hit with a cover of the Nine Inch Nails song "Hurt." The video, which chronicled Cash's life, was powerful and moving for most fans. Russell said he was disappointed that it didn't win best video at this year's MTV Video Music Awards.

"I thought it was sad they didn't give him that award, because that video laid out his whole life," he said. "It makes you want to cry."

Trent Reznor of Nine Inch Nails told The Associated Press on Friday that he was honored when he heard Cash was interested in recording his song.

"To hear that Johnny was interested in doing my song was a defining moment in my life's work," he said. "To hear the result really reminded me how beautiful, touching and powerful music can be. The world has truly lost one of the greats."

Cash's turn on "Hurt" was not so surprising to long-time fans. It was the kind of thing he'd always done, said country singer Edd Greer. Cash shared both his triumphs and his pain through his music.

"What made him such a star was that he went through life sharing his hard times, along with his good times, with his fans," Greer said. "His music reflected his life, and he will be missed by millions."

Greer said Johnny Cash's legacy for musicians is in the way he showed them how to stay true to themselves. Like so many others who spoke about Cash on Friday, he used the word "original." Most people said there was no one else like Cash, and likely never would be again.

"I remember Johnny Cash as a great guy who was a total American original," said fellow country star Charlie Daniels. "He shall be missed."

Despite his checkered past and rebellious nature, most people believe that Cash has earned his place in the pantheon of music greats.

"All saints wear white, but I believe the good Lord will welcome The Man in Black," Griggs said.

Posted by Fred Phillips at 5:40 PM