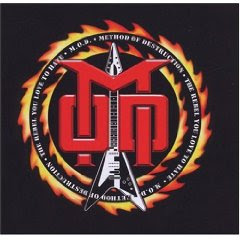 On M.O.D.'s latest album, the first since 1996's "Dictated Aggression," he takes the music in a different direction. After watching, of all things, "Weird Al" Yankovic's "Behind the Music," Milano was inspired to introduce parody and satire into M.O.D.'s arsenal. He's done it well on "Rebel You Love to Hate."

It starts on the cover with parodies of Michael Schenker Group and Kiss covers, and continues with the music. He takes on all-comers, with jabs at rapper Eminem, German rockers Rammstein and, of course, the easiest target in entertainment, Osama bin Laden. One of the most poignant attacks comes in "Rage Against the Mac Machine," where Milano points out the fundamental flaw in the reasoning of highly successful bands that rail against the evils of capitalism.

The album also offers some different sounds for M.O.D., from the incorporation of Eminem's "please stand up" chorus in "Wigga," a statement about white suburban rap fans who style themselves gangstas, to perfectly aping the techno-metal sound of Rammstein on "De Men of Stein" and Kiss on "Get Ready," which could be considered either a parody or a tribute.

There are of course some typical hardcore M.O.D. numbers like the title track and "He's Dead, Jim," a tribute to an extra on "Star Trek." Then there are the fiercely patriotic thrashers "Making Friends is Easy" and "Assghanistan."

The only downside of this album is that there isn't enough of it. There are only eight new songs, and Milano fills out the album with semi-live versions that change very little and radio edits, which no one wants to listen to anyway. Still, he packs plenty to be happy about into those eight tunes. M.O.D. is reborn and better than before.

Get "The Rebel You Love to Hate."
Posted by Fred Phillips at 8:35 PM