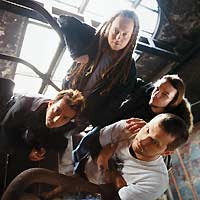 After a successful run on the second stage of Ozzfest this summer, Flaw is getting back to grass roots. Over the next seven weeks, the band will be hitting smaller venues in places that Ozzfest didn't reach in an effort to expand their fan base.

Singer Chris Volz says Ozzfest was a once-in-a-lifetime experience, but he'll be happy to get back to a more intimate setting - not to mention a more normal performance time.

"(Ozzfest) was a rotating schedule, so some days we were literally on stage at like nine in the morning," Volz said. "That was quite strange."

He says Flaw won't miss the big outdoor shows of Ozzfest, though. This tour will give them a chance to connect more closely with fans.

"It's really almost a separate feeling when you play these huge outdoor festivals because the barricades are 15 or 20 feet from the stage," he said. "People don't feel as close to you as they do in a club setting where they're right up against the stage and you can reach out and shake hands, talk to them, show respect in that manner."

Taking care of their fans and earning new ones is what Flaw is all about. Volz says they try to go the extra mile in their live shows, even when that includes hanging around afterwards.

"We have an intense live show," Volz said. "We're really energetic. We go nuts a lot. We really just try to feel what the crowd is feeling. We're also the band that stays after the show and signs autographs until the last person is gone. It's a really emotional thing for us."

It seems to be working. Their major label debut "Through the Eyes" has shipped 300,000 copies in its first year of release, and their latest single "Whole" is still going strong. The diverse collection of songs appears to have a wide appeal. Volz says he hopes there's something on the album everyone can relate to.

"We definitely like diversity in music, and we feel music should imitate life," he said. "Life's never really the same for too long. We think music should follow that same guideline, so it never really gets stale."

Coming out of Louisville, Ky., the band had a few problems getting noticed early on. One thing they needed was a CD to put in press kits and promo packs. That was an issue with the shoestring budget provided by their part-time jobs. A popular music catalog's 30-day money back guarantee provided a unique, if perhaps legally questionable, solution.

"We ordered all of the equipment we needed out of Musician's Friend to record our own album," Volz explained. "They have a 30-day money back guarantee, so we used the stuff for about 26 days and recorded as many songs as we could in that time. Then we sent it back saying we just didn't like the equipment. All we had to do was actually pay for shipping and handling, so we recorded 13 songs for about $69."

Volz and the rest of the band have no regrets about the deception. He says they were hungry to make their mark in the music business, and that was the only way open to them.

With Universal, the band doesn't have that problem. Volz says they'll finish writing for the second Flaw album when this tour is over and go into the studio in January. He hopes to have a new product out by spring 2003. Then they'll hit the road again.

"We're going to stay on the road, keep coming to as many towns as possible and try to stay in everyone's face so that they have a chance to understand exactly what we're trying to do," he said.
Posted by Fred Phillips at 6:06 PM