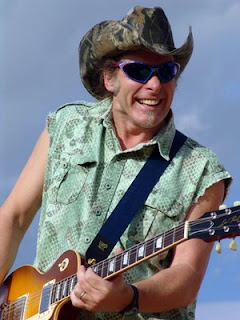 Some might say Ted Nugent is the walking, talking definition of dichotomy.

The outspoken - and often outrageous - rocker is just as at home screaming at the top of his lungs from the stage or sitting quietly beneath a forest canopy waiting on a trophy buck. He's a rock 'n' roll wildman who also touts sobriety and family values.

Nugent admits that some people might consider those things a contradiction, but for him, rock 'n' roll, family and hunting are all part of the ultimate life experience.

"My being, my gift of life, compels me to manage it for quality of life," Nugent says. "Clean, sober and at a higher level of awareness."

Outrageous
Nugent is currently rolling across the country on his annual summer tour and looking forward to the release of his new album "Craveman," due out on Spitfire this fall.

As with everything, the gonzo guitarist talks about his upcoming tour and the album with supreme self-confidence, often crossing the border into outright cockiness.

The new album marks the return of a sound Nugent fans will be familiar with. It's raw, raunchy and angry, and the 53-year-old musician wouldn't have it any other way.

"I happen to be on a rhythm and blues jihad right now," he says with a chuckle. "I call it throbnoxious. The music is so throbnoxious. It's so rhythm and blues and so gutsy. It covers all bases from outrage and insanity to genuine spirituality. I couldn't be more proud of it. It's got 14 songs, and every one of them will rearrange your face."

Nugent credits bass player Marco Mendoza and drummer Tommy Clufetos with the power and intensity of the music. As for the attitude, that's all Nuge. One look at song titles like "Rawdogs and Warhogs," "My Baby Likes My Butter on Her Gritz" and "Sexpot" will tell Nugent fans all they need to know about the album.

The Motor City Madman says he's playing most of the songs from "Craveman" on this tour, but not to worry, he's also working in fan favorites.

One particular tune seems to have a lot of resonance during his performances. "Fred Bear," a tribute to bowhunting legend and Nugent mentor Fred Bear, brings the house down every night, the rocker says.

"The highlight of my life is 'Fred Bear,'" Nugent says. "We played it in the upper peninsula of Michigan the other night. I'm telling you, the man was there."

Nugent says the song has a mystical quality that engenders a feeling of brotherhood in the crowd.

"I have more hunters and fisherman per capita in my audience than any society on the planet," he says. "There is a blood-brotherhood campfire that ignites when I play that song that is just magical."

Outspoken
In the 1970s, Ted's testosterone-fueled anthems like "Cat Scratch Fever" and "Stranglehold" ruled the rock stages. In recent years, though, Nugent's become known just as much for his mouth as his music.

The guitarist, known affectionately by his fans as "Uncle Nuge," is a staunch political activist who also encourages his fans to get involved in government. He often closes concerts by urging people to write their congressmen.

The rocker is active in a wide variety of organizations from the National Rifle Association to Mothers Against Drunk Driving to the Big Brothers/Big Sisters program to his own Ted Nugent United Sportsmen of America. His work has earned him praise from conservative leaders like Tom Ridge and President Bush.

Among the causes Nugent champions is the fight against drug and alcohol abuse. No matter how wild he is on stage, Nugent says he's never taken drugs and never will.

"I've made it a crusade to let people know that you can't rock 'n' roll and have a fun life like Ted Nugent unless you're clean and sober - you'll hurt yourself," he says. "My idea of a party doesn't include puking and dying."

Nugent has even made it a goal to help other rockers overcome their addictions. He points out friends Steven Tyler and Joe Perry of Aerosmith and says he'd like to think he had a hand in helping them kick their habits. He's also taken on one of the most notorious musicians of today's scene, Kid Rock.

"I went down and jammed with Bob Ritchie, and the guy was chain-smoking like an idiot," Nugent says. "Here's a guy with an amazing voice - and Bob Seger was there, too - and these guys were chain smoking, two of the greatest voices out there. I put some pressure on them. I said 'Bob? Bob? What are you guys doing?'"

He also works to keep children off drugs through the Drug Abuse Resistance Education program, though his methods often raise eyebrows.

"I'm without question the most effective D.A.R.E. officer in the history of the program," Nugent brags. "When I confront children, they relate to me because of my attitude, my uppitiness and my street language."

That last part is what bothers some people, he says.

"I don't use the f-word with grade-schoolers, but I will use the phrase 'kiss my ass," Nugent says. "Some people will get all upset and say, 'ooh, he used the a-word.' Wait a minute, we're talking about saving kids. When was the last time the a-word killed a child? Let's get our priorities straight here. If you want kids to relate to you, you have to speak on their level."

Outdoors
But the two issues that are nearest and dearest to Ted Nugent are hunting and Second Amendment rights. The guitarist has become one of the nation's most prolific speakers on the subjects. He appears on radio and television talk shows, writes for a number of publications and has even written a pair of books - "God, Guns and Rock 'n' Roll" and a wild game cookbook "Kill It and Grill It."

But even in the hunting community, he has critics - people who don't like his straightforward and confrontational approach. Nugent says directly challenging anti-hunters, as he regularly does on talk shows, is the only way to get the message out.

"That's what the hunting community has always needed to do," he says. "Instead of backing down and saying, 'well, we catch and release,' we should be challenging people. We should be saying, 'No, no, no. Your tuna is dead. We kill our food. Get over it.'"

Nugent says taking the defensive in the face of anti-hunting attacks isn't going to help hunters.

"Never defend the sport; always promote it," he says. "When you see illegal and nasty behavior by our fellow sportsmen, either clean them up or throw them out. We've got to really be dedicated to upgrading this honorable hunting and fishing lifestyle imagery, so more people will join us in this environmental upgrade. That's all I really live for."