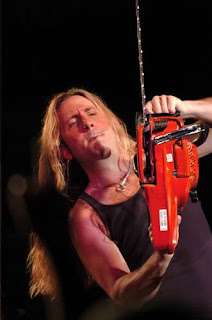 Hard rockers Jackyl are probably known just as much for their on-stage antics as for their music, but for frontman Jesse James Dupree, it's all in a day's work.

"If you don't (give the fans a show), they might as well sit home and listen to the record," Dupree says in his no-nonsense Southern drawl. "I've got to have the whole ball of wax. I want to see a man shot out of a cannon."

The self-proclaimed "Redneck Punk" from Kennesaw, Ga., has done his share of crazy things on stage. He regularly destroys stools with a chainsaw, sings from the back of a mechanical bull and fires off his shotgun microphone stand. He's even been known to take the stage clad in his cowboy boots, guitar and little else. But one performance stands out in his mind.

"We played an awards show in Atlanta, and they tried to tell us what we could and couldn't do," he says, his grin coming through the phone line. "We snuck about 40 chickens and roosters in and let them out on stage. They're flopping and flapping around everywhere at this black tie event. The Indigo Girls were there, and they were going crazy. I thought I was going to have to bare-knuckle fistfight one of them. That was messy."

Stunts like that aside, the band is also one of the hardest working when they're on the road. In 1999, they entered the "Guinness Book of World Records" by playing 100 shows in 50 days. After that, the band took a brief hiatus to focus on solo projects, but they reformed in 2001 and started writing new music. This summer they're out on the road as part of the Rock Never Stops tour with Tesla, Motley Crue singer Vince Neil and Skid Row.

Though Jackyl didn't release their first album until 1992, they're often grouped with the "hair bands" of the 1980s. Dupree describes Jackyl's music as "blue jean, blue collar" hard rock and doesn't understand why they're grouped with the glitzy '80s rockers.

Despite his reluctance to be grouped with those bands, he thinks the new tour is a good fit.

"We've always steered clear of packaging with anybody; we stayed out in left field and did our own thing," Dupree says. "It's kind of cool being in the middle of it, though. We're playing with Vince Neil - the guy sold 30 million records in Motley Crue, you've got to respect him. And Tesla is as far from a hair band as you can get. They're a straight up blue jean heavy rock band; they never wore eyeliner or puffed-up hair and neither did we."

Jackyl is probably best known for their 1992 hit "The Lumberjack," in which Dupree first broke out his signature instrument - the chainsaw.

"It's just a very definitive instrument," Dupree says. "It's loud, aggressive, abrasive, destructive, stanky - everything rock 'n' roll should be when it's done right. It's really a perfect fit."

Since then, every Jackyl album has featured a prominent chainsaw solo. But does he get tired of being known as the "chainsaw guy?" Not at all. It's just part of the package.

"If it was just that, it probably would bother me," Dupree says. "But there's another whole group of people who know me for going to jail about 10 times for getting naked, or the guy who has a goose gun for a mic stand or the guy that set the stage on fire at Woodstock '94 … I'm the guy that's in the band that doesn't mind showing their asses to entertain."

In late 2001, Jackyl racked up hits of another kind, when they posted the song "Open Invitation" to their Web site (www.jackyl.w1.com). The song, with its "I hate you, bin Laden" chant and blunt expression of the anger many people were feeling at the time, was downloaded 80,000 times in the first two weeks, causing the server to crash and costing the band about $10,000, says Dupree. But it's something Jackyl felt they had to do.

"We were in the middle of recording, and we wanted it to be a fun environment where we could crunch out some straight-up rock," Dupree says. "Then Sept. 11 happened. The only way we could vent was to record a song and put it out there."

That new album, which includes a song co-written by AC/DC's Brian Johnson, should be released later this year. AC/DC has been a big influence on Jackyl, and working with Johnson is like a dream come true for Dupree, who also traded vocals with the legendary screecher on the track "Locked and Loaded" from Jackyl's 1997 album "Cut the Crap."

"If you're a NASCAR fan, it'd be like Dale Earnhardt Jr. letting you take his car around the track for a couple of spins," Dupree says. "Brian Johnson is a perfect example of someone who has been very successful, but is still just a real guy. My friends will come over to the house, and he'll be there reading car magazines and having a beer. He's just a real, personable, down-to-earth guy."

Jackyl completed its obligation to Geffen Records with a "best of" album called "Choice Cuts" a few years ago, which leaves them free to shop their latest album to other labels. Dupree says they're looking for a company that really believes in the band.

The flamboyant frontman believes the future is bright for Jackyl. He thinks the world is ready for their brand of brash and cocky hard rock again. And if it's not, the band still has its hardcore fan base.

"We just want do what we do, and luckily, we've got such a supportive base - they've been incredible," he says. "I think the only thing that would end that is if I was to start rapping."
Posted by Fred Phillips at 12:29 AM