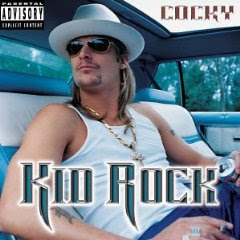 The title of Kid Rock's latest album "Cocky," is, if nothing else, appropriate. But perhaps this time he's gotten a little too cocky for his own good.

Fresh off the huge success of 1998's "Devil Without a Cause," Kid Rock sets out to prove he's not a one-trick pony on this album. There's no denying the talent of his Twisted Brown Trucker band, as they effortlessly shift from R&B grooves to headbanging metal to foot-stomping country. I have to question if this is really what fans want from Kid Rock.

Those who enjoyed the punchy mix of hard rock and hip hop on "Devil Without a Cause" may not find much they recognize on this album.

The first single "Forever" mixes a catchy, funky guitar riff with some nice hooks. And the title track, with its self-aggrandizing swagger, echoes the attitude of his last album. But beyond that, this album is a self-indulgent jumble of musical styles which leave the listener wondering what's going on.

"Picture," his country duet with Sheryl Crow will be a big hit, I'm sure - and if it wasn't Kid Rock, it would probably cross over to country radio. But it's boring and a bit hard to swallow.

The same with the other country tune "Lonely Road of Faith." It's really hard to take these heartfelt lyrics about devotion seriously coming from someone who was just extolling the "virtues" of strippers on the last song.

The other guest appearance is rapper Snoop Dogg on the track "W.C.S.R." This is a pointless exercise in vulgarity, that seems to be a contest between the two to see how much profanity they can fit in a three-minute song.

Songs like "Midnight Train to Memphis" and "Drunk in the Morning" seem to drone on in a country twang before erupting into something more like what you expect from Kid Rock. They're not bad songs, but I have to wonder how many of his fans are going to sit through the first two minutes to get to the "good part."

It's not all bad, though. When the country/rap/rock formula works, it's fantastic. The perfect example is "You Never Met a Motherfucker Quite Like Me." The song layers twangy guitar over a hip hop beat with just a touch of Southern rock on the chorus.

Of course, I would like to hear him write a song every now and then about something besides himself, but what can you expect on an album named "Cocky?"

"What I Learned Out on the Road" starts with a smooth country sound, then moves to a funky Aerosmith-flavored chorus. It's one of the strongest songs on the album.

Then he takes a heavier turn on "I'm Wrong, But You Ain't Right." The introduction is an obvious tribute to Bob Seger's "Turn the Page," but then the tune explodes into heavy Pantera-influenced screamer.

The Southern-fried blues groove of "Baby Come Home" is addictive, and may be my favorite song on the album. While the Iggy Pop-inspired punk of "I'm a Dog" showcases Kid Rock at his conceited best.

Overall, "Cocky" is not bad. Kid Rock accomplishes his goal, which is to show more musical depth.

But, in all honesty, if I want musical depth, I'm not going to look to Kid Rock. I look to him for uptempo tunes with plenty of swagger, and above all, plenty of fun. While it is a good album, I've got a feeling a lot of fans will wear out the skip button.