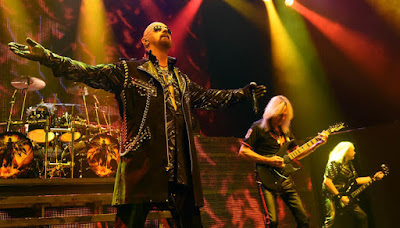 I consider it a major parenting win that one of my teenage son’s favorite bands is Judas Priest. Oddly, despite my lifelong love of heavy metal, they were also one of the bucket-list bands I hadn’t seen until last fall, when we got a chance to see them in Biloxi, Miss.

I left that concert a little disappointed, not in Priest’s performance, which was great, but in other aspects of the show. The seating chart at the venue wasn’t accurate, and our seats turned out to not be so great. But the big turn-off was the fact that the crowd was just dead that night.

I wanted a better Judas Priest experience, and when they announced a return to the U.S. this year, I couldn’t resist trying a different city. I’ve had mostly good concert experiences in Little Rock, and this one was no exception.

Before we get into Priest, though, I have to give a nod to opening band Uriah Heep. In all honesty, I’ve never been a fan and only recognized two songs that they played all night, but I was highly entertained. They brought it hard for nearly an hour, with energy and attitude. If not for the gray hair and grizzled looks, it would have been tough to believe that several of those guys on stage had been at it for 50 years.

It was a good warmup for the main event. With flood waters from the Arkansas River literally licking at the back of the First Security Ampitheater stage, Judas Priest stormed the front of it and took away everyone’s cares for the next hour and a half.

Having just done a U.S. run last fall that was mostly a greatest hits-style set, the band decided to mix it up a little bit this time out, plugging in some rarities and deep cuts and leaving out some of their bigger hits. I’m guessing that a few people might have left disappointed to not hear “You’ve Got Another Thing Coming,” for example, but I was not among them. It’s one of those songs I’ve heard so many times over the years, I don’t need to hear it again.


Of course, that meant that I had to prepare my son for the fact that he wasn’t going to get his favorite Judas Priest tune, “Electric Eye.” In Biloxi, the disappointment had started to set in until the opening notes of lead-in “The Hellion” hit to start the encore, then all was right with the world for him.

I talked about what they were playing and provided him with some of the deeper cuts on the setlist that I didn’t think he was familiar with, but I held one tidbit of information back. They were playing his second-favorite song, “The Sentinel,” which we hadn’t heard in Biloxi. I wanted to see his reaction when he heard that opening riff, and it was so worth it. The look of joy and recognition in his eyes when he recognized it was the highlight of the night for me.

But let’s rewind to the opening song of the set, “Necromancer,” from the 2018 release Firepower. This song featured perhaps the most Rob Halford moment of the night as he strutted on stage wearing a sparkling purple coat and top hat with antlers and sporting a skull-topped staff. Part horror-movie voodoo priest, part Disney cartoon character, the outfit was over-the-top ridiculous and somehow absolutely awesome at the same time, as was the performance.

After an opener from the new record, the band immediately dipped back into the catalog for fans of their classic material with a rousing performance of “Heading out to the Highway,” followed up by the highlight of my family’s night, “The Sentinel.” Then they went back to the new material with “Spectre,” my personal favorite track from Firepower. You couldn’t find many fans in the crowd still seated after that opening volley of songs.

At that point, the exploration of the back catalog began. They hit all the big albums, but not necessarily the songs you’d expect. The run started by slowing things down a bit with “(Take These) Chains” from Screaming for Vengeance, the oldest of several songs being played live for the first time on this tour, then launched right back into the pummeling with “Judas Rising” from Angel of Retribution. The latter started out a little rough, but found its groove around the first chorus – and no cell phones were harmed by Halford in the performance of the song as in a much-publicized incident during the song a few nights earlier.

A disco ball set the mood for another slow down with “Out in the Cold” from Turbo, which was followed by a string of other lesser-played tunes, including “Traitor’s Gate” (Firepower), “Starbreaker” (Sin After Sin), “Steeler” (British Steel) and “Tyrant” (Sad Wings of Destiny).

If there was a lull during this rarities section, the band picked it up for the closing numbers of the main set, beginning with “No Surrender” from Firepower. Judas Priest has dedicated the song to guitarist Glenn Tipton, who is still a writing and recording member, but has been forced to give up touring for the most part due to a battle with Parkinson’s Disease. That paired with images of Tipton performing with the band projected on the screen made it an emotional number.

The crowd exploded when guitarists Richie Faulkner and Andy Sneap met at the center of the stage to play the opening lick of “Victim of Changes.” Everyone came back to their feet, singing along, banging heads and throwing horns to the grooving main riff of one of the band’s classic songs. The screeching fury of “All Guns Blazing,” from Painkiller, closed the main set with Halford again giving his vocal cords a high-pitched workout.

That had the crowd primed and ready for the encore. There were no rarities to be found in the final three songs, but rather a lineup designed to send everyone home exhausted but happy.

The final 15 minutes didn’t give fans a chance to catch their breaths. It opened with one of the most iconic moments in any Judas Priest concert – Rob Halford riding his Harley Davidson (for this tour painted in the theme of their latest album Firepower) on to the stage to perform “Hell Bent for Leather.”


If there was anyone in the crowd still in their seat at the end of that song, which I doubt, when the band launched straight into the main riff of “Breaking the Law,” they came to their feet. Halford stormed the stage belting out the classic, while fans forcefully shouted the chorus back at him as he urged them on.

But that was just the beginning of the audience participation, as they closed with “Living After Midnight.” That finale had been one of the most disappointing moments of last fall’s show, when Judas Priest leaned on the audience to sing the chorus, and Halford might as well have been holding the mic out to an empty room. That wasn’t the case in Little Rock, as the crowd was only too eager to shout it out and probably would have kept it going for as long as the band played.

When it was done, I turned to my wife and said something about the previous audience that I won’t repeat here, but suffice it to say that this was the experience that I wanted in a Judas Priest concert. It was a show designed for dedicated fans of the band – the kind who would come to see them a second time just a few months removed from their last run through the States – and those were the people who showed up in force.

I walked away from the amphitheater with great memories of the music, and a lasting moment with my son. If for some reason I don’t get to see Judas Priest live again, I’m more than happy with what I got on this night.
Posted by Fred Phillips at 8:57 AM