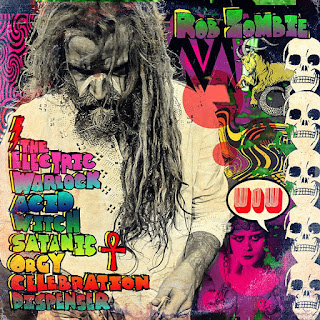 Once upon a time, I thought Rob Zombie was something of a metal genius. The last two White Zombie records and his first solo album, Hellbilly Deluxe, were all landmark records of the 1990s as far as I’m concerned. (We’ll forget about all of the dance remix records.) They were weird and quirky, pushed the boundaries at times, but were still undeniably metal.

Then, he decided he wanted to make movies, and music seemed to become a side job. The Sinister Urge, his follow-up to Hellbilly Deluxe, while not a bad record, was far too brief with a lot of filler. Since then, he’s released really good songs here and there, but his albums as a whole haven’t really interested me.


In truth, the same could be said of the new record – which I’ll call Electric Warlock out of laziness to keep from having to type all that every time – as The Sinister Urge. It’s a very short record, checking in at just over 30 minutes for 12 songs. And again, there are a number of short instrumental filler pieces. But no matter how short they are, the songs on the album are, in my opinion, some of the best he’s done since Hellbilly Deluxe.

I’ll start with third track, “The Life and Times of a Teenage Rock God,” which is a bit of a throwback to Hellbilly. The grooving pre-chorus pulled me into the song, and the stomping chorus had me cranking the volume and banging my head wildly. It was one of those tunes that got four or five listens the first time through the album.

Immediately following that up is first song released from the record, which fittingly is completely unplayable on radio – “Well, Everybody’s Fucking in a UFO.” This is a weird piece that sounds like a cross between White Zombie and Primus. It’s got a stomping, heavy riff, but Rob Zombie spends most of the song doing his best impression of Les Claypool. It’s more than a little silly, but it’s great fun.

The first actual single, “In the Age of the Consecrated Vampire We All Get High,” shortened to “Get High” for its release, is in the same vein as some of his more commercially popular tunes from past albums, most notably White Zombie’s “More Human than Human.” It’s got a catchy groove, and at only 2:15, doesn’t wear out its welcome. “Get High” isn’t the only track that will remind fans of his former band, though. “Satanic Cyanide! The Killer Rocks On!” fills the need for a slower-paced, heavy wall-of-sound type piece, and reminds me of some of the slower numbers from La Sexorcisto.

“In the Bone Pile” has a bit of a stripped-down sound, but it has a sinister, horror-movie style feel to the chorus that makes the song. “Get Your Boots On! That’s the End of Rock and Roll” has a cool, swinging old-fashioned hard rock flavor with just a few psychedelic touches.

The album closes with “Wurdalak,” the only song clocking in over three minutes on Electric Warlock. At 5:30, it’s practically an epic by comparison. Don’t let that fool you, though, as the first 30 seconds or so is white noise and the last 45 seconds or so is just thunder sounds. The song plays again on his love of old school horror movies. The Wurdalak is a Russian vampire, written about by Tolstoy and brought to the screen in Mario Bava’s Black Sabbath, a film that’s inspired Rob Zombie before. This track is very different from the rest of the record, finding Zombie using some very heavy vocal effects to go with a chugging Sabbath-influenced riff. After the first verse, a dark piano piece comes in with the requisite movie samples, and another piano, this time by itself, plays the song and album out.

If I have one complaint about Electric Warlock, it’s that guitarist John 5 seems to be a little wasted. You’ve got one of the more quirky and innovative guitarists in hard rock right now, and he really doesn’t get a lot of chance to stretch out. Of course, there’s not a lot of breathing room in a two-and-a-half minute song.

I’ve seen complaints about the length of the album and about the fact that it’s perhaps not quite as adventurous as some of the records that he’s done in recent years, but Electric Warlock gives me exactly what I want from Rob Zombie. There’s just enough strangeness to make it interesting, but the songs are fun, catchy throwbacks to what I consider his best work.