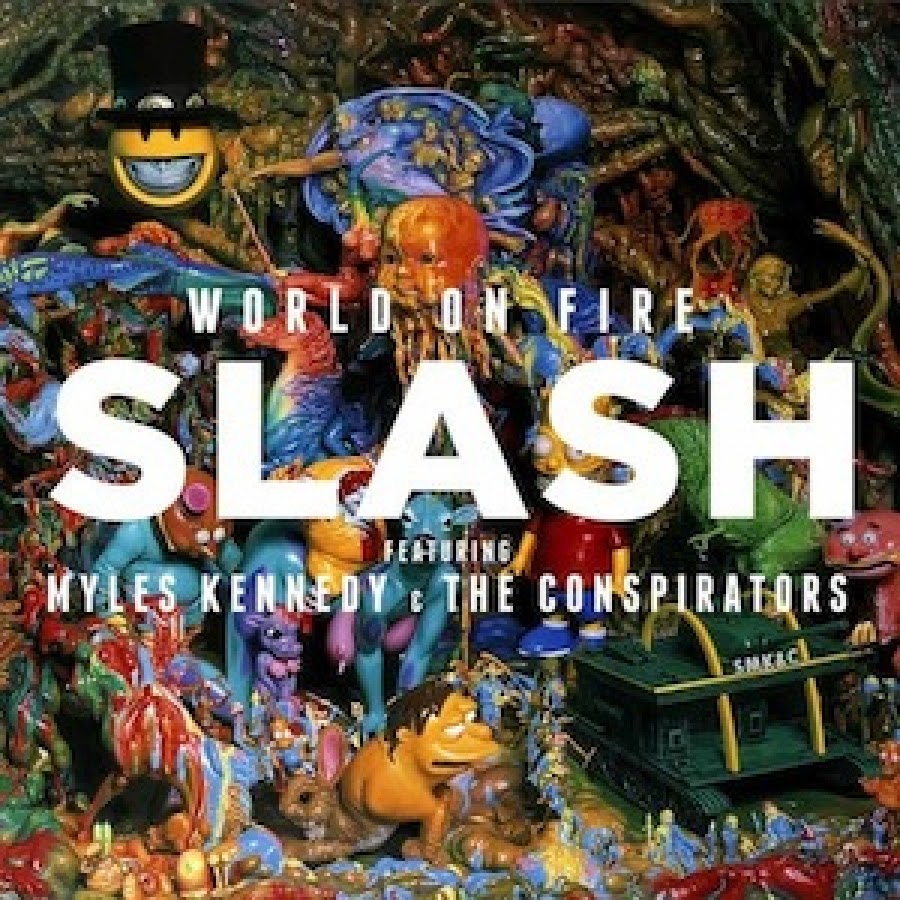 Slash’s 2012 record Apocalyptic Love blindsided me. I went in for a half-hearted listen, and it turned out to be one of my favorite records of the year. Of course, that means the expectations for the follow-up were much higher.

World on Fire races out of the gate with the same vibe and energy that Apocalyptic Love brought, but it doesn’t sustain that drive and fizzles a bit toward the end.

I appreciate Slash wanting to give fans more bang for the buck with 17 tracks on the album, but maybe it should have been pared down a little as many of the tracks that come late on the record kind of blend into each other.

For now, though, let’s focus on the first part. The title track gets things kicked off with a sound very much like that last record. It’s a rollicking, straight-ahead rocker. “Shadow Life” slows the pace very briefly, but after a soft opening, it kicks into a gear with a big, grooving riff from Slash. The first tune that may put listeners in mind of Slash’s former band is the down and dirty rocker “Automatic Overdrive,” which also might conjure thoughts of “Jumpin’ Jack Flash” on the chorus.

Though I don’t find anything on this record as instantly likeable and catchy as “Halo” or “Anastasia” from Apocalyptic Love, the stomping groove of “Wicked Stone” comes pretty close. There are undertones of G n’ R, but a big lively chorus takes it in a direction that caters to Myles Kennedy.

And speaking of Kennedy, I was a little unsure of him on Apocalyptic Love, but he continues to grow on me. I never denied his vocal talents, but I wondered if there was enough grit in his voice to deliver on the style of music that Slash writes. At times here, they’re still slightly uncomfortable bedfellows, but at others, the combination is perfect.

The best example of that, and perhaps the best tune on the record, is “Beneath the Savage Sun.” The song opens with a grinding riff that’s part blues rock, part grunge. The grunge element gets played up with Kennedy’s moaning vocal, but then, all of a sudden, the song gets kicked into rock ‘n’ roll overdrive for a few seconds. It continues to bounce between a dark, brooding piece and a soaring rocker for its entire nearly six-minute running time, with a Queen-like interlude between a pair of Slash guitar solos and an almost thrash-like riff to end. I can’t imagine any other vocalist being able to pull it off quite like Kennedy does.

Similarly, on “30 Years to Life,” Kennedy’s warbling vocal blends beautifully with a tasty slide riff from Slash before things kick up into another Guns-style tune. Kennedy soars on the chorus, once again putting his stamp on things and erasing thoughts of that other band almost as soon as they arrive.

Now to the second half of the record. Things get off into the weeds a little, but it still has its moments. The slinky, sleazy “Dirty Girl” matches the rocking tone of the first part of the album. The faux country/protest song at the beginning of “The Dissident” is kind of fun, and it delivers a memorable chorus, even if it has some shades of 1980s pop.

Other songs have their moments, though fleeting. I really like the blues-rock licks of “Withered Delilah,” but the rest of the song doesn’t quite live up to that riff, and the instrumental “Safari Inn” has its ups and downs.

There’s a kick-ass rock ‘n’ roll record to be found on World on Fire, but the inclusion of a few generic tunes and a couple of downright dull ones on the latter half of the album waters it down and lessens the impact a little bit. With modern technology and a little bit of judicious paring, though, World on Fire can be made every bit the equal of Apocalyptic Love.

Make it Slash and Myles Kennedy 2, Axl and four other guys 0.