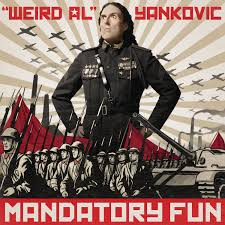 I was probably 12 or so when my family got cable TV for the first time. I believe that plan had 12 channels — which seemed like a wealth of content to someone who had previously only received three, or a fuzzy fourth when the weather was right and you adjusted the antenna to just the right spot.

One of those channels, at least for a little while, was HBO. In those days, HBO wasn’t stacked with as many promos for their stuff as regular TV was with commercials, and the network would sometimes play music videos between programs. It was there that I first discovered “Weird Al” Yankovic.

I remember seeing the video for “I Love Rocky Road,” his parody of Joan Jett and the Blackhearts’ “I Love Rock ‘n’ Roll,” and cackling with laughter. I give Weird Al full credit for making rocky road, which I had never had at the time, my favorite ice cream to this day. My parents scratched their heads at how entertaining I found this, but I think they were just happy that it wasn’t some of the other stuff I was beginning to get into at the time.

A short time later, Al would release “Eat It,” his parody of Michael Jackson’s “Beat It,” and his career would take off. Up through the late 1990s or early 2000s, I faithfully bought every Weird Al record when it came out. I even have the boxed set. He also led to the large selection of musical humor in my record collection and my obsession with music that is weird, quirky or funny.

His last few albums, though, I haven’t picked up. The fault is mine more than Al’s, but I’ve become so far removed from popular music in my old curmudgeonly age, that I don’t recognize most of the songs that he’s parodying anymore. Though still sometimes funny, parody loses some of its appeal when you’re not familiar with the original song.

After hearing a couple of tracks from his latest, Mandatory Fun, I sat down to write a review and discovered that, of the eight songs that he parodies, I was only familiar with two. Pharrell Williams’ “Happy” from the movie Despicable Me becomes “Tacky” — with an accompanying hilarious video that features, among other things, Jack Black twerking. Imagine Dragons’ “Radioactive,” a song my son loves that has become a guilty pleasure of mine because it’s so damned catchy, becomes “Inactive,” sort of a sequel to “Fat,” Al’s parody of Michael Jackson’s “Bad.”

But there was one song that, despite the fact I wasn’t familiar with the source, left me rolling with laughter. I’ve now looked up Robin Thicke’s “Blurred Lines,” but I still prefer Weird Al’s version, “Word Crimes.”

I write and edit for a living, so the message of the song holds a special place in my heart, but it’s enjoyable by anyone who has ever facepalmed after seeing someone hurl the insult “your stupid” in social media comments. (Yes, Al defines irony for us in this song, too — with a visual jab at Alanis Morissette in the video.)

Over the melody of Thicke’s tune, Al goes over some of the worst crimes committed daily against the English language, particularly in online communications. There’s using one letter to represent a word, or as he explains, “just keep in mind that be, see, are, you are words not letters. Get it together.” In a similar vein, he admonishes, “You should never write words using numbers, unless you’re 7 or your name is Prince.”

Al also takes on misused words and phrases, for example people who say “I could care less” when they actually mean they couldn’t care less. But my favorite part of the song is his take on the misuse of “literally,” which you have to hear him deliver to fully appreciate.

Even after a dozen or so listens, I’m still laughing my head off (not literally, though). It seems to be a song that’s destined to become an anthem for those of us who love words and work with them on a daily basis.

While the rest of Mandatory Fun does contain some funny and entertaining material, nothing on the record connects with me quite as much as “Word Crimes,” which I expect to think about and smile every time I see a mangled, indecipherable comment on Facebook for years to come.