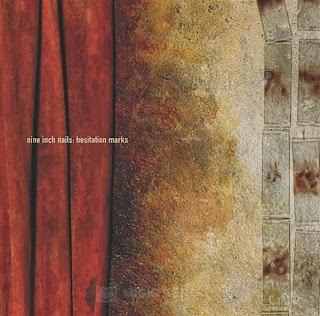 As a teenage metal head, I was convinced that all things electronic in music were evil. Then, a roommate in college introduced me to Nine Inch Nails’ Pretty Hate Machine. Much to my embarrassment, I found myself cruising around with tunes like “Terrible Lie” and “Head Like a Hole” blaring out of my speakers. I’d never thought that drum machines and electronics could convey as much emotion as I found on that record.

When Trent Reznor cranked up the guitars on the Broken EP, my personal favorite, I became an even bigger fan. I had mixed feelings about 1992’s The Downward Spiral, though, and though I always check out his new stuff, not much that Reznor has done since has grabbed me.


The promo for Hesitation Marks sat on my desk for nearly three weeks before I even got around to popping it in to the CD player. I’d heard a stream of “Came Back Haunted” and been less than impressed with it, so I didn’t have much enthusiasm for the record. But Reznor has surprised me again, just as he did all those years ago.

By the time I was halfway through second track “Copy of A,” which features Lindsey Buckingham on guitar, I was feeling pretty nostalgic and actually digging it quite a bit.

On Hesitation Marks, Reznor does something that’s normally the death knell of an artist for me. Despite the presence of Buckingham and Adrian Belew on several tracks each, he’s stripped away most any trace of the heavy guitars that I loved from Broken and delved more back into the electronics and keyboards. It works because it takes me on a journey back to those days when I first heard Pretty Hate Machine and first was forced to admit that maybe there might be some merit in electronic music.

I even liked “Came Back Haunted” better on this listen. Maybe it has something to do with the nuances you can hear through headphones and CD as opposed to a stream. And the moody “Find My Way” kind of hits a nerve with me right now, but by the fifth track, I was hooked.

There’s something strange in “All Time Low.” Could it be … almost … fun? The song features a funky guitar and a party-style beat. Lyrically, the song is, at times, a bit at odds with the upbeat music, but that just adds to the experience. It’s somewhat out of character, but it’s also one of the most interesting NIN songs that I’ve heard in a long time. I find myself going back to it over and over.

This new and strange happiness returns on the poppy, garage rock and 1980s alternative-influenced “Everything.” If “All Time Low” was out of character, this tune is downright jarring. It’s one of the few times that Reznor brings a heavy guitar into the record, and the whole mood is one of hopefulness and positivity, something we’ve rarely, if ever, heard on a Nine Inch Nails release. Admittedly, it’s not my favorite track, as I prefer the moody and angry Reznor, but it’s worth noting.

There’s still plenty of moodiness, brooding and anger on tunes like “Various Methods of Escape” and “I Would for You,” but even in that last one, there’s an air of optimism and hopefulness in the chorus.

Hesitation Marks manages to be, at the same time, very familiar and very different. Fans of Nine Inch Nails will recognize the sound immediately, but the moods and atmospheres have changed a bit. The album gives fans a portrait of a more mature, changing Trent Reznor, and it’s likely a work that many of those fans who loved the anger of Pretty Hate Machine can relate to as they grow older. There’s still anger, still bitterness, still uncertainty in the music on the album, but there’s something of a different outlook on it. The overall feeling I’m left with is that as much as the negative emotions of life may suck, they’re still an essential part of the experience. That, of course, plays into the title of the record as well.

It was around this time 22 years ago that Reznor, via my roommate, first surprised me and opened up my ears to what was going on in the industrial and electronic genres. It’s been about 20 since I pretty much wrote Nine Inch Nails off. But two decades later, he’s surprised me again with a record that I’m finding really relatable to my life right now. It’s not the anger, depression and bitterness of the young long-hair, but that of the middle-aged bald dude who, instead of railing at it is trying to figure out how to cope and how those things fit into his life. While Reznor may not exactly like that analogy, it’s fitting, at least in my case.

Posted by Fred Phillips at 4:46 PM