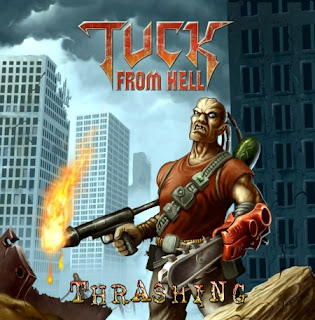 It’s kind of hard to take a band named Tuck From Hell seriously, particularly when their record contains song titles like “Barbecue Beast,” “Tuckerz” and “Italian Stallion” and the cover features a cartoon guy wielding a chainsaw and flamethrower. But if you’re a fan of old-school 1980s thrash, it’s kind of hard not to like them.
Tuck From Hell clearly draws its inspiration from the 1980s titans of thrash — Metallica, Megadeth, Testament. Unlike those bands, though, you won’t find many heavy topics on Thrashing. Instead, the band takes the more light-hearted approach of early Anthrax or D.R.I.
Few of the songs here are delivered in a jokey way, but it’s also clear that the band doesn’t take itself too seriously, either. There also aren’t any attempts at the “epic” seven to 10 minute songs from that era. The songs here, for the most part, are short and punchy. Most clock in under the four-minute mark, with a few landing around two minutes. They pack a lot of punch into short tracks, though.

Don’t let the light-hearted approach fool you. When it comes down to the business of thrashing, these guys are serious. The record is loaded with big riffs, blasts of breakneck speed and some very tasty lead guitar licks. Vocalist Niklas “Tuck” Ingels falls somewhere between James Hetfield and Chuck Billy, reminding listeners of both at times during the album. He occasionally throws a small curve, like the Rob Zombie-ish chorus vocals on “I, Hellbilly” or the hard rock approach on “I’m Rollin’,” but he rarely strays far from the well-established growl-singing style of 1980s thrash. Guitarists Petrus Grant and Marcus “Polo” Bengts deliver the requisite clipped riffs and wailing leads, and the rhythm section of Tomas Sonesson and Nils Fredrik Johansson keep things tight.

There will be some familiar flair here and there, like the flowing Megadeth inspired opener to “Italian Stallion,” which is actually one of the better songs on the record. There’s a Testament-style groove to “Death Before Disco,” with Ingels delivering the vocals in an exaggerated Hetfield caricature. There’s a shot of Slayer speed early on “Tequila Race,” with a nice little harmonic squeal on the guitar thrown in. It’s familiar and derivative, but never comes across as stale. And I dare any child of the 1980s to crank up “Headbanger” without having a bout of fond nostalgia.

There’s nothing on Thrashing that thrash fans haven’t heard before, but it’s still a lot of fun. With the nostalgia for my ’80s childhood kick I’ve been on lately, digging bands like White Wizzard, Holy Grail and Nekromantheon, Tuck From Hell fits perfectly. Thrashing earns two horns up high from me.

Posted by Fred Phillips at 4:20 PM