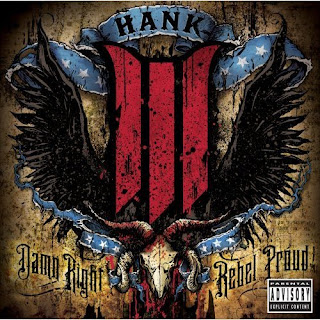 (Note: I know this is kind of old, but I've got a little catching up to do with some reviews I didn't get posted late last year. This is the first.)

It would be hard to be raised in the south without a healthy respect for Hank Williams. I grew up on the music of Hank Williams Jr., and even in years when you couldn't have paid me to listen to a country song, if you put Bocephus on the radio, I was going to be singing along. As much respect as I have for Senior and as much as I love Junior, III might possibly be the Hank I relate to most.

No, I don't condone the wild and reckless lifestyle that he leads and often promotes in his songs, but I love the spirit of them. I'm a kid that came from a country background but grew up loving heavy metal. As I've grown older, I've developed a much healthier respect for classic country, particularly the outlaws. There's not a lot out there that marries those two worlds beyond Hank III, who can do a spot on impression of Senior one second and rip out a hardcore metal tune with Superjoint Ritual the next.

After years of battles and a couple of attempts by his record company to make him a modern day version of his grandfather, III was turned loose on his last record, "Straight to Hell," and the results were outstanding. He finally put on record many songs that had been fan favorites in his live show for years. It was rude and crude, but at the same time refreshing. He takes the traditional from his grandfather, the outlaw from his dad, then feeds it into a Marshall stack and cranks it up to 10. Traditional country with a metal attitude.

This time around, III didn't have quite the catalog of unrecorded fan favorites built up, and it shows at times. Still, "Damn Right, Rebel Proud" will deliver exactly what fans want, and you can hear that in the first song, "The Grand Ole Opry (Ain't So Grand)," an anthem for his campaign to get his grandfather reinstated. True, a profane rant probably isn't the way to win over the folks at the Opry, but would you really expect anything less?

From there, the record settles into a largely more sedate mood. It's certainly less irreverent than "Straight to Hell," even though it does bring in a little more of the hellbilly style he performs in his live shows on songs like the lead single "Long Hauls and Close Calls," perhaps the best blending of the styles he's ever put on record, and the punked-up G.G. Allin tribute "P.F.F."

As usual, there's some country fare that traditionalists would embrace if they could get past the other side of III. The more upbeat numbers, like "Wild and Free" and "Six Pack of Beer" succeed better here. Of the slower numbers, few really connect. The plaintive "I Wish I Knew," just doesn't ring true with III's spirit. And far from evoking the haggard, haunted atmosphere of "Country Heroes" from his last record, the total downers "Candidate for Suicide" and "Stoned and Alone" just make you want to reach for the fast forward button.

The good far outweighs the bad, though. There's no question that "Damn Right, Rebel Proud" is a bit safer than "Straight to Hell." There are even a few numbers here, like "Me & My Friends," that have at least some potential to make the jump to commercial country radio. But there's still enough rebellious hell-raising to please fans and keep the live show rowdy.