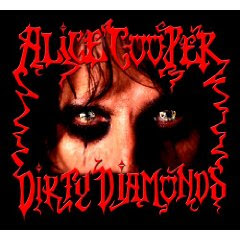 Popping in the latest album from Alice Cooper is a lot like entering a time warp. The first thing I noticed when I picked this record up is that the cover looked a lot like one of his 1970s albums. When I put it in the CD player, it sounded a lot like one of those albums as well.

Alice Cooper has shown a chameleon-like ability to keep his music in line with the current trends, while managing to put just enough Alice Cooper into the music to not sound like a trend-chaser. (Well, there was the awful Hey Stoopid, but I’ll forgive him that – even though it took me about 10 years to do it.) So in the 1980s, he flirted with the hair band sound, gaining his most commercial success with Trash. Then in the late 1990s, he absorbed the nu-metal sound, producing the heaviest, and in my mind one of the best, albums of his career with Brutal Planet. Then, he came full circle with his last album, The Eyes of Alice Cooper. Much of that album echoed his original sound, which also just happens to be the sound of the current garage rock trend. (You know, all those “The” bands.)

Dirty Diamonds takes the concept of "Eyes" one step further and immerses the listener completely in the 1970s sounds, bringing Cooper back to the gritty Detroit rock that brought him to the dance. “Woman of Mass Distraction” and “Sunset Babies (All Got Rabies)” would be right at home on any of his 1970s albums. A strong Stones influence comes through on “Perfect” and there’s a feel-good, bubblegum feel to “You Make Me Wanna.” But this is still an Alice Cooper record, and things turn a bit nastier on the title track, which sounds like a cross between the Misfits’ “Where Eagles Dare” and Black Sabbath’s “Paranoid.”

Cooper’s legendary black humor is still in full effect on this album, on songs like “Own Worst Enemy.” Perhaps the best example, though, is on “The Saga of Jesse Jane,” a twisted take on a Johnny Cash-style storytelling ballad that offers the chuckles for the record. There’s also a surprise here and there, like the funky “Run Down the Devil,” the bluesy number “Six Hours” and even a duet with rapper Xzibit, “Stand.” (Though I do have to say I could have lived quite happily without ever hearing an Alice Cooper duet with any rapper, but that’s just my personal musical tastes.) Through it all, Alice is still at his best when he’s rocking out, as on the driving (no pun intended) “Steal That Car” or the rollicking “Sunset Babies.”

There are also a couple of trademark slower, dark tunes a la “Welcome to My Nightmare.” “Pretty Ballerina” really doesn’t do much for me, but “Zombie Dance” works quite well, evoking a voodoo feel.

In the end, Dirty Diamonds certainly won’t rival Cooper’s great 1970s albums like Billion Dollar Babies and Welcome to My Nightmare, but it proves that he can still rock. This is a fun record for both the long-time Alice Cooper fan and fans of the current garage rock scene.

Get "Dirty Diamonds."
Posted by Fred Phillips at 7:04 PM