Review: Iced Earth, "The Blessed and the Damned" 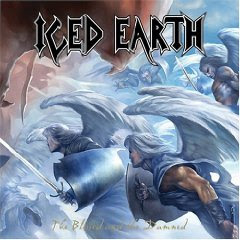 Putting together a two-disc set that's representative of Iced Earth's nine albums for Century Media is quite a daunting task. Surprisingly, the track list on "The Blessed and the Damned" looks a lot like a homemade Iced Earth compilation that I put together a while back. In other words, Century Media nailed it.

The collection features 23 tracks, ranging from their self-titled 1991 debut through 2001's "Horror Show." For the tracks that have more than one version, they've done a good job picking the best ones. For example, they put the original version of "Stormrider," which I've always felt was stronger than the Matt Barlow version, but they chose the obviously stronger Barlow version of "Angels Holocaust."

I was also happy to see room made for some of the band's longer tracks, like the 9-minute epic "Damien" from "Horror Show."

I do have a few quibbles with the track listing. I would have found room for "Slave to the Dark," one of my personal favorites, and "Ghost of Freedom." But no compilation can be perfect, and likely other Iced Earth fans have favorites that were left off, too. This collection is about as close to perfect as they come.

While most fans will already own the songs on the album, the package offers a little extra for collectors. It's got gorgeous artwork by Russian artist Leo Hao, who has done covers for Iced Earth and Blind Guardian before. The art depicts a battle between angels and demons - "The Blessed and the Damned" - and is reversible, so you can have angels or demons on the cover depending on your mood. The booklet also features lyrics, an introduction by former Century Media publicist Loana dP Valencia and commentary from Iced Earth founder/guitarist Jon Schaffer on each album.

Get "The Blessed and the Damned."
Posted by Fred Phillips at 10:02 PM