Review: In Flames, "Reroute to Remain" 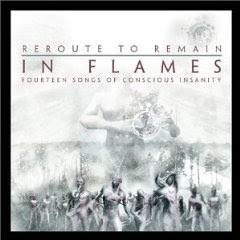 Fans of In Flames may be a little surprised when the band unleashes its eighth studio album, "Reroute to Remain: Fourteen Songs of Conscious Madness," in the United States on Sept. 3.

In Flames, one of the innovators of extreme metal's Gothenburg sound, takes a slight turn on its newest release. The result is the band's most complex and mature album to date.

"Reroute to Remain" doesn't feature any individual songs quite as catchy as "Pinball Map" or "Satellites and Astronauts" from the band's breakthrough 2000 album "Clayman." But overall, their latest offering is much more satisfying than that release - and that's saying something.

Like all good metal, most of the songs on the album are built on solid guitar riffs. There's plenty of good old-fashioned heavy rock to be found. The title track is a Sabbath-inspired slugfest, while on "Drifter," the band thrashes like Metallica in their prime.

But In Flames' other influences also show during the course of the album. There's a hardcore punk feel to the opening riff of "System" and industrial influence invades several songs, especially in the vocal department.

Hanging over the whole album like a pall is a dark and brooding goth mood. Almost every song on the album has bleak moments of reflective melody that owe more to the Cure than to Slayer.

Most surprising may be the folk influence that shows up on "Dawn of a New Day" and especially "Metaphor." The violin work and arrangement on the latter gives it the feel of something you'd hear at a European country fair.

We also get to hear more of Anders Friden's voice on this album. While there are still enough insane snarls to satisfy the band's longtime fans, in the quieter moments, he lets his true voice shine through, and that's not a bad thing. It lends deeper emotion to songs like "Metaphor," and also makes for some nice harmonies in the heavier songs, putting the listener in mind of the art rock bands of the 1970s.

"Reroute to Remain" is a little different, but it's also better. In Flames has offered up its richest tapestry of sound to date - one woven with threads not found in the average extreme metal mix. Sometimes growth is good - in this case, very good.

Get "Reroute to Remain."
Posted by Fred Phillips at 12:03 AM